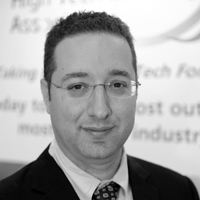 Oded Hermoni leads the Silicon Valley activity of Rhodium where he lives with his wife and two young children's. He is very active and involved with Rhodium’s US and Israeli portfolio and is a member of the investment committee. Oded created one of the most impressive business networks within Silicon Valley working closely with local investors and global companies.  He is on the screening committee of TIE angels and a Chapter Member of TIE, one of Silicon Valley strongest entrepreneurs network , he co-chair the IEFF- the Israeli Entrepreneurs and Founders forum of Silicon Valley and he is involved with many angels clubs, Accelerators and Incubators in the Valley and frequently serve as a panel member and speaker in numerous Silicon Valley events.
Oded worked in different position within the High tech industry in the past years- he was an entrepreneur of 2 start ups, of which one was acquired by Yellow pages group, been an early stage investor within investment group, a well known Journalist  and headed the Israeli Venture Capital industry association and formed the IATI (previously HTIA) - The largest Umbrella organization of the Israeli High tech.
During his years in the industry, Oded was involved with over 25 companies as investor/board member/ advisory or observer. He believe that the Investment is just the first step and it is more important to actively assist the portfolio companies. Oded served also as advisor to many companies and governments (Among them the Israeli government), he was a panelist and speaker in many global conferences.
He loves gadgets of any form, and for 10 years had a monthly column about consumer electronics in TheMarker Magazine.
Oded Holds a  BA and MBA degrees - both from the Hebrew University in Jerusalem. He is a Captain (Reserve duty) of the Israeli Army.